"We are enjoying on the water" 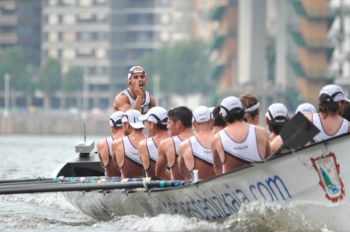 The 'Galipo' Zierbena Bahías de Bizkaia ambitiously face their third consecutive participation in the San Miguel League. And is that prepared by Juan Zunzunegui, despite having had "a lot of change in the template, the group is strengthened and is working much more comfortable. Although for almost 80% of the workforce this is his first year with us, not many differences are noticeable, "explains technical 'Galipo', which already has its sights set at the start next June 19 in Seville battle for CaixaBank Crown. Based on this, it also notes that "some things are correcting and early season so far, have automated some gestures that had not quite right. The last few weeks are enjoying in the water," said the Galician coach.

And the view is as the 'Galipo' prevailed in the Basque Country Championship long distance a few weeks ago. "It's a reference that tells you that we are on the right track," says Zunzunegui. "We try to give a good performance and avoid the pressure of being back," coach appreciates Zierbena Bahías de Bizkaia. And that, he says, the great pressure to which it is below "risking relegation and over, unable to aspire to win flags".

This website uses its own cookies and cookies from third parties in order to optimise your browsing experience, better meet your needs, and perform analytical tasks.By continuing to browse you accept our Cookies Policy.ACCEPT